On May 14th, 2021, Pope Francis delivered an inspiring address that marked the opening of the Stati Generali della Natalità, or the General States of Birth, in Italy, as we announced at the beginning of May. FAFCE’s Italian member organisation, the Forum of Family Associations, organised the event to discuss the problems posed by plunging birth rates in Italy and to initiate cross-sectoral solutions involving not only the Church, politicians, and family associations, but also banks, media organisations, and cultural entities.

At the beginning of his statement, Pope Francis highlighted the stark reality that many young people do not believe that they can have as many children as they would like to have. The Pope confronted the attendees with this fact, noting, “there are many other people here with you: above all, there are the young people who dream. The data say that most young people want to have children. But their dreams of life, buds of rebirth for the country, clash with a demographic winter that is still cold and dark: only half of young people believe they will be able to have two children in their lifetime.”

His Holiness spoke to the importance of the link between children, parents, and grandparents. However, the maintenance of this link, especially during the pandemic, required sacrifice, which the older generations tend to shoulder. Pope Francis highlighted this truth, saying “how many sacrifices are required of grandparents, the true lifelines of families! But not only that: they are the memory that opens us up to the future.”

The importance of women and motherhood took center stage in the Holy Father’s statement. Pope Francis reacted to the phenomenon of maternal mobbing, on which topic FAFCE recently published a white paper. Whereas perpetrators of maternal mobbing view pregnancy and motherhood as suboptimal or altogether shameful, Pope Francis inverts this. He declared, “I also think, with sadness, of women at work who are discouraged from having children or have to hide their pregnancies. How is it possible that a woman should feel ashamed of the most beautiful gift that life can offer? Not the woman, but society should be ashamed, because a society that does not welcome life stops living. Children are the hope that gives birth to a people!”

In a moving part of his statement, Pope Francis reminded Italian and Western society of the profound importance of the notion of giving and receiving gifts. He lamented that consumerism blinds people to the value of gifts, or even leads people to regard them as inferior to what has been purchased. Of all imaginable gifts, the Pope reminded listeners, life is the greatest, because no one can give life to oneself. Finally, the Holy Father exhorted the assembly: “Let us help each other, dear friends, to rediscover the courage to give, the courage to choose life.”

Pope Francis announced the “need for wide-ranging, far-sighted family policies: not based on the search for immediate consensus, but on the growth of the common good in the long term”. FAFCE embraces this call, which has been a central element in all FACE Board Resolutions to the EU and national stakeholders.

Ultimately, Pope Francis envisions a response to declining birth rate that requires the commitment and cooperation of every sector of society. Pope Francis observed that “Solidarity then calls on the worlds of culture, sport and entertainment to promote and enhance the birth rate. The culture of the future cannot be based on the individual and the mere satisfaction of his or her rights and needs. What is needed is a culture that cultivates the chemistry of the whole, the beauty of giving, the value of sacrifice.”

The Holy Father’s statement stands out as a revolutionary contribution to the ongoing discussions about the future of Europe. Policymakers and leaders across every sector often speak about sustainability. “But we also need to talk about generational sustainability” – the Pope says. “We will not be able to nurture production and preserve the environment if we do not pay attention to families and children. Sustainable growth comes from here. History teaches us this.” Moreover, “Sustainability needs a soul, and this soul… is solidarity.” The future rests in the hands of families. As Pope Francis pronounced, “If families are not at the centre of the present, there will be no future; but if families start again, everything will start again.”

At the conclusion of the event, two pregnant women presented Pope Francis and Prime Minister Draghi with bonsai trees as a symbol of their hope for a national resurgence in the birth rate and the arrival of the long-anticipated demographic spring.

FAFCE will refer back to the Holy Father’s statement, during its webinar on Demographic Change and the Future of Europe, jointly organised in cooperation with the EPP Working group ‘Intercultural and religious dialogue’. Please click here to register. 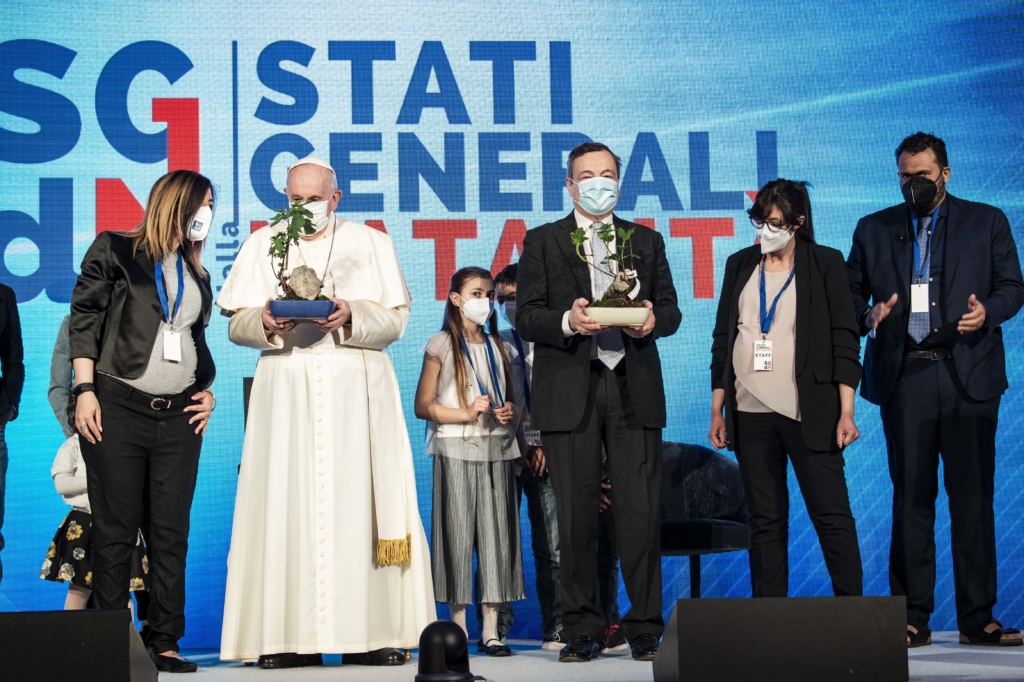